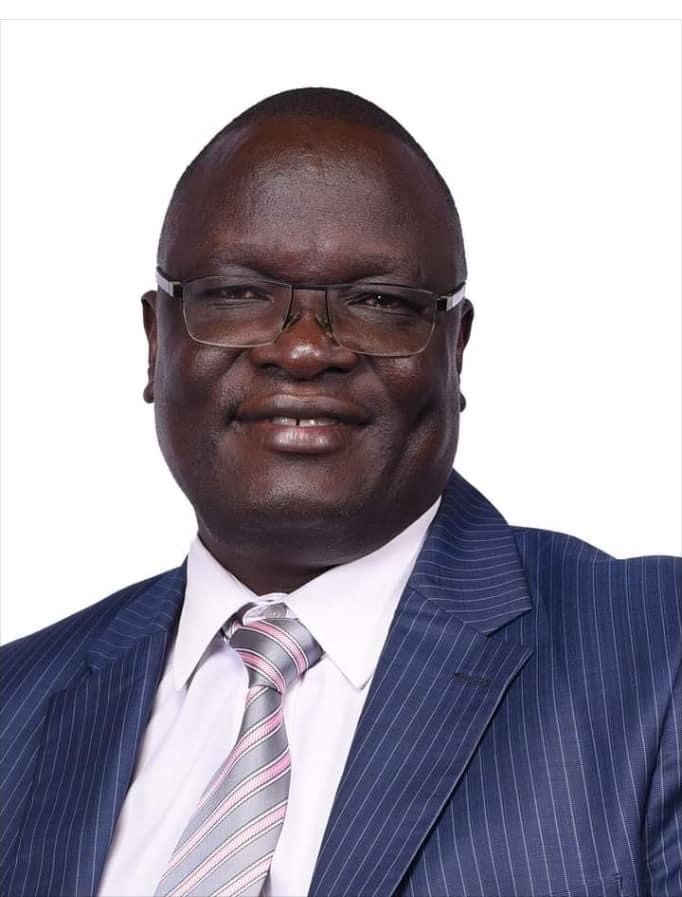 The controversial and highly questionable circumstances under which the former Agricultural Finance Corporation (AFC) Chief Executive Lucas Meso, orchestrated, engineered, manipulated and executed the auctioning of the land belonging to the late former Vice President has come back to haunt him. Also caught up in the imbroglio is Mr Meso’s kingpin and financier Deputy President William Ruto who was the benefactor of the highly skewered process of the multi-million shillings 900-acre land in Narok County. The auction happened after many other CEOs at the helm of the AFC declined to auction off the land which was used as security by the late Murumbi to secure a loan from the Corporation, the action by Mr Meso raises more unanswered questions than answers.

The question is, why did the government or AFC fail to waive the late Vice President’s loan considering the service he rendered to this nation and his struggle for the country’s independence from the British colonial rule? Why when many loans secured by senior government and state corporations officials sitting and retired have had their loans running into hundreds of millions of shillings waived – some under questionable circumstances?

It has since emerged that the whole initiation and execution and auctioneering process was not only skewered but heavily manipulated as there is no evidence to show that due diligence,accountability and transparency were ever followed during the entire process. 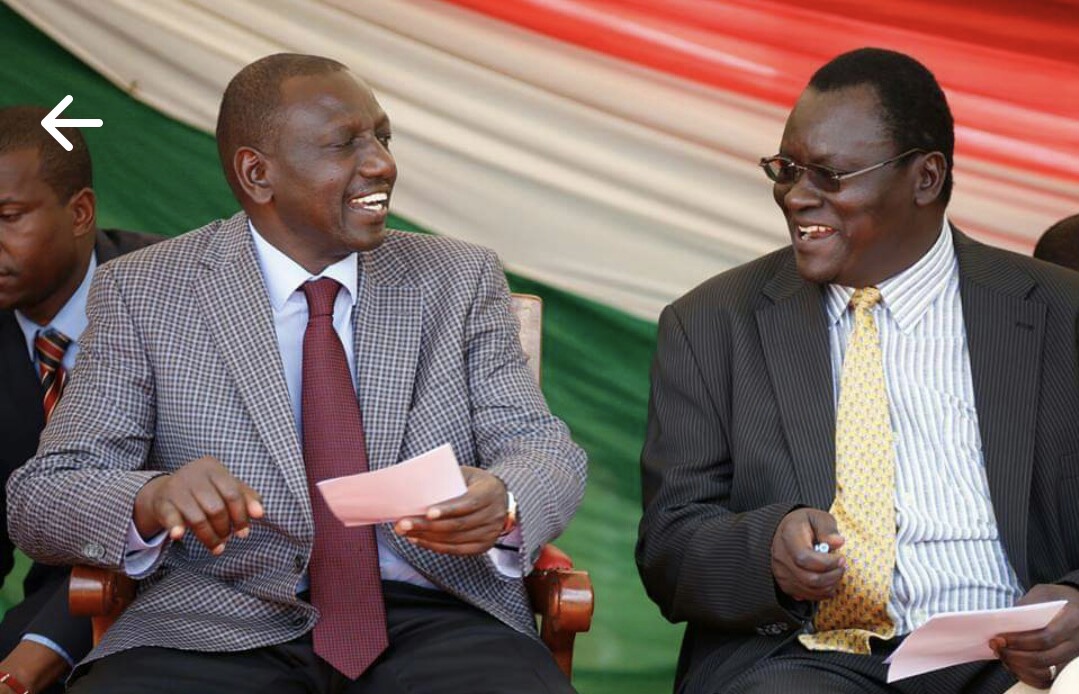 DP Ruto and Lucas at a function. File photo.

DP Ruto played a critical role in ensuring that Mr Meso secured the top position at AFC having been his close confidante during the Jubilee government first term in office. Otherwise, why did Mr Meso orchestrate, engineer and execute the auctioning of Mr Murumbi’s land during his tenure in office when so many other CEOs in that office before him never took that action?

This brings into focus the integrity not only of DP Ruto who is desperately fighting to grab the country’s Presidency in the next year’s general elections while his acolyte Lukas Meso is gunning for the Busia County’s Governorship on Ruto’s United Democratic Alliance (UDA) some have come to dub as Ufisadi Daima Alliance? It also leads to another critical query concerning Mr Meso as a professional technocrat in a state corporation controlling billions of shillings annually, what tangible development and employment programmes did he mastermind and execute for the residents of Busia County?

What difference is there in the acquisition of part of the late Vice President Murumbi’s land and the way in which Weston Hotel land was acquired from the Kenya Civil Aviation Authority (KCAA)? Was it enough to establish an AFC branch office at the Busia County’s headquarters in Busia town? What difference has it made to not only the county’s farmers but also residents’ socio-economic lives especially in his home Butula sub-county? What can he do as the County Governor controlling fewer funds annually compared to what he controlled at the AFC CEO?

However, the former AFC CEO continues to defend his actions over the disputed late Hon Murumbi land auction saying that the sale of the land was beyond reproach, insisting that ‘it was above board, but is silent on its orchestration, engineering, manipulation.  This brings into question how many acres of land does Meso’s Kingpin Ruto own across the country? More still how did he acquire them and his surrogates or plants like Meso and how much did the latter also acquire in the process?

Lukas Meso is on the record being quoted by the local media saying that North Mugor Limited is closely associated with DP Ruto like the Weston Hotel on Nairobi’s Lang’ata road acquired the land after a 13-year period that saw most of the earliest bidders spooked by the squatter problem drop out – two other bidders failed to meet the corporation’s counter offer.

Related Content:  US Treasury Department Computers Hacked And Information Stolen By A Group Backed By A Foreign Government

He said: “AFC received all the Khs 63.4 million from North Mugor as payment for the 976 acre-land hived from the initial 2,090-acre Intona Ranch. AFC, a development financial institution which extends loans to individual farmers and corporations, took possession of the land after Intona Ranch defaulted on a Ksh 8.6 million loan it had borrowed on September 16, 1985.”

By August 20, 1989, the outstanding loan plus interest had snow-balled to Sh24 million, with the company left with little to no option but to recall it. Thirty years later, the land was sold to North Mugor Limited, through their lawyers Kemboy & Co Advocates.

A human rights group, Trusted Society of Human Rights Alliance, recently accused AFC of undervaluing the land, noting that the public might have lost close to Ksh180.5 million. The human rights lobby had also alluded to corruption, insisting that the corporation did not receive the full amount. But AFC said the sale of the 976 acres was informed by two “professional” reports done in a span of three years — May 23, 2012, and September 9, 2015.

The first valuation by Hectares & Associates valued the entire piece of land, the 2,090 acres, at the open market value of Sh124 million while another one by Highland Valuers Limited, put the open market value at Sh130 million. The second valuer also estimated the forced sale value, the auction price, at Sh97.5 million. The corporation says that, unlike another two bidders who had expressed interest, North Mugor Holdings accepted its counter-offer on September 16, 2015. The sale agreement between the two was executed on October 19, 2015, with the buyer making the required down payment of Sh15,860,000 in two tranches.

The first tranche of Shs 9,860,000 was paid on September 25 while the second tranche of Sh6 million was received by the corporation on November 6, 2015. The MD goes on to say that the balance of Sh47.6 million was received on November 16, 2015, through three transactions in one of its National Bank accounts. Mr Meso is defending his questionable actions saying: “It is clear that third parties with no locus-standi in the matter have at all times tried to deprive the corporation of this property, hiding under adverse and ancestral rights claims. This activism should not be entertained.”

The Trusted Society of Human Rights group has since written to the DCI, seeking to have the deputy president questioned. He is accused of illegally acquiring a 900-acre piece of land in the lush Maasai Mara Game Reserve, through a company called North Mogor Holdings through manipulations executed by his crony Meso.

Meso was also in the headlines over a similar case that was exposed on Twitter, where Macheda Mike had accused him of using his position to illegally auction over 27-acres of their family land. 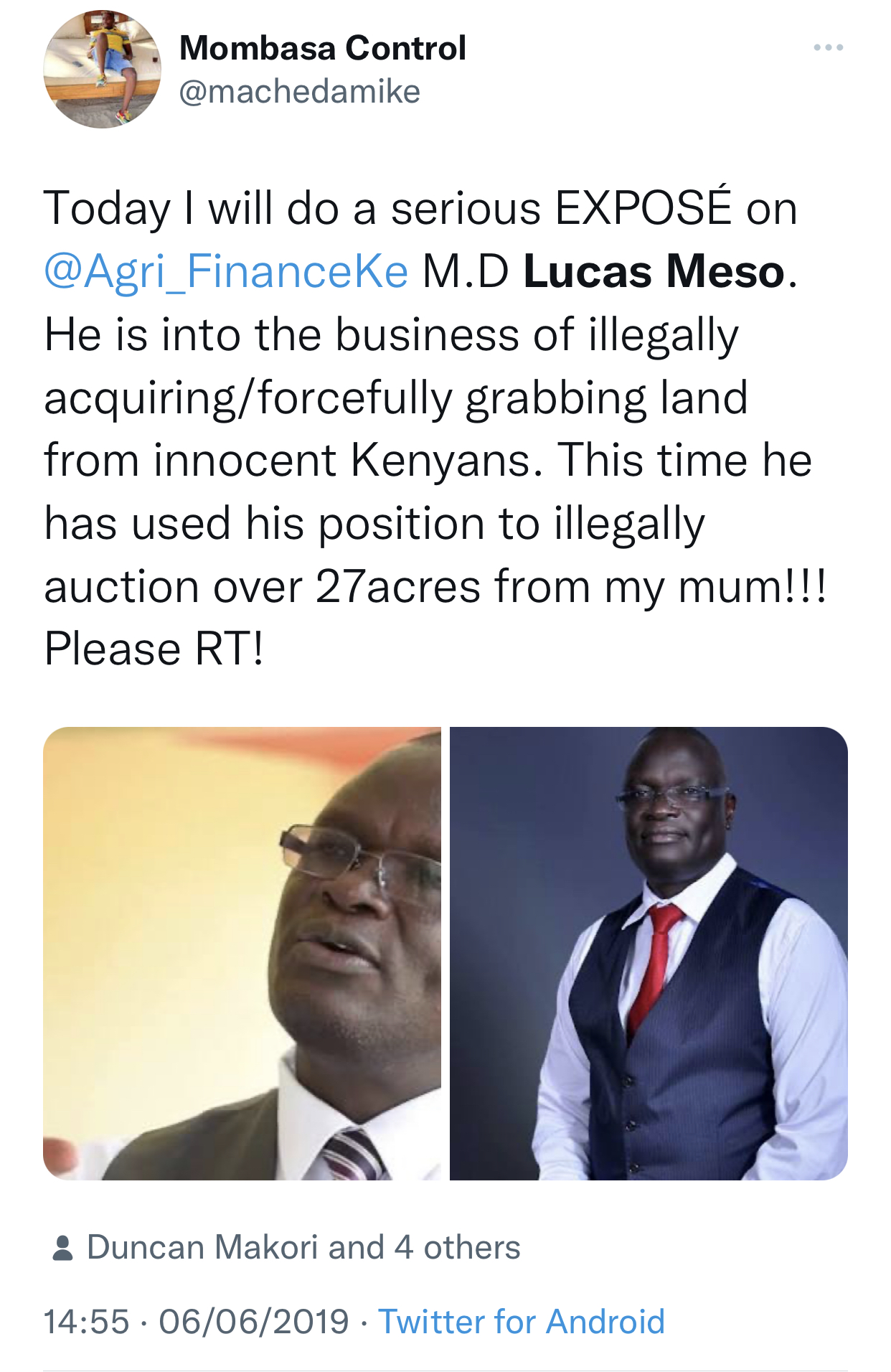 The scandalous Meso is vying for Busia Gubernatorial seat using a ticket of a party allied to his partner DP Ruto even though they’ve been reports that he’s duping the DP that he owns the said party.

The NRA Secretary General Amemba Magufuli has accused the former MD at @Agri_FinanceKe, Mr.
@meso_lucas for allegedly using their party to con @WilliamsRuto

Kenya Insights allows guest blogging, if you want to be published on Kenya’s most authoritative and accurate blog, have an expose, news TIPS, story angles, human interest stories, drop us an email on [email protected] or via Telegram
Related Topics:Lucas Meso
Up Next

Call For Arrest Of Nairobi Assembly’s Speaker, Board Over Unlawful Appointment Of Acting Clerk

Bandari Sacco On The Spot Over Misappropriation Of Funds