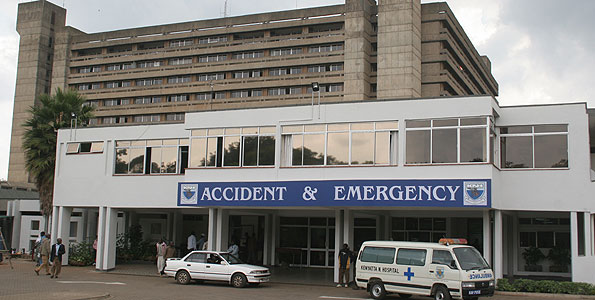 Kenya Insights has been serializing the scandals and problems engulfing the Kenyatta National Hospital and how the deaths of the staff out of crude environment has been unending issue. We also told you how KNH CEO, Dr Evanson Kamuri is to blame for the rising deaths of the personnel and his dismissive I don’t care attitude that continues to not only demoralize the referral hospital but shrink the workforce.
We ask that you pay close attention to the following issues exclusively researched and unearthed by Kenya Insights that are running down the hospital that was once the pride of East and Central Africa. For those who have been keen to note, services at the hospital have been going down tremendously in the last three (3) years even as the authorities watch. This has caused a lot of issues in the management and within the staff. Misuse of power and abuse of office have been the highlights. Some of the issues are indicated here. Dr. Kamuri has been the CEO for the period and he seems to be clueless on how the institution should be run and now everything is going south. Raising a lot of questions on his competence and why something has to be URGENTLY done.
The Board of Management
KNH has not had a  Board of Management for one year plus. This has brought a serious gap in the management and administration of the hospital. The cunning CEO and some directors in the hospital have exploited this gap to the disadvantage of the hospital. Led by the CEO, Director – Procurement and the Director – HR, the management has made the hospital their private property. The Chair of the board Mr. Ooko is a very polite and weak chairman. He doesn’t seem to understand the details of the hospital well two years down the line. The CEO has noticed that and has completely blocked him from seeing the gaps and weaknesses in the hospital. Dr. Kamuri can also be very manipulative. He has been able to manage the board chairman through some soft benefits that are available to him.
Dr Kamuri the CEO and Human Resource
The CEO is the leader of the entire cartel. Since he took over the office in 2019, he has made sure that laws are not followed. The three main administrative departments that are key in ensuring effective and sound utilization of public funds i,e Finance, Procurement and HR are headed by one tribe, That is the tribe of the CEO (Kikuyu). Before he took over the office, only one out of the four offices was headed by kikuyu. To make the matters worse, they were chosen (appointed) and didn’t go through any competitive process as per the law. In the affiliations department, he disagreed with Dr. Menge and as his usual character, with backup from the ministry of health, transferred him to the ministry. No one understood that it was calculated until he appointed Mr. Mbogo, a very junior and inexperienced officer to the office of the Director, Affiliations. (Another Kikuyu). The CEO has made the hospital his home and an urban village. He has three (3) wives, three baby mamas and four girlfriends. All of them are working in KNH. It has also come to the knowledge of the public that even the CEO was not qualified for the position and those who installed him into the position are now nowhere to be found. That was the previous board. In the interview, the CEO was number 6. The weakest candidate in the interview. But this is Kenya and we know how it goes. He was made the CEO by his cartels regardless. His specialization is also questionable. When his peers were going back to medical school for specialization, he took a shortcut and did some short cut certification somewhere unknown. He’s not a complete consultant.

KNH -OTHAYA
Through the ministry of health, KNH was given the mandate to run Othaya. Budget allocated by the ministry. The management has contravened all procurement laws by giving unreasonable contract variations that are against what is provided by law. The president was supposed to commission the hospital in Othaya Nyeri. Based on intelligence at the Office of the President, he cancelled the visit after realizing the massive irregularities ongoing. KNH is now a black spot of corruption and impunity thanks to the new regime. The president has decided to support KU Hospital instead after realizing these inconsistencies.

KNH AND  KEMSA SCANDALS Relationships
KNH has been consuming medical supplies from KEMSA for the last three years. The items in most cases are poor quality. Doctors reject them but the management has forced the hospital to use them by all means and if you raise questions you are threatened and intimidated. The CEO and Miringo have been working with the KEMSA team in cutting some deals. Dr John Manjari, the former CEO who was dismissed because of the  deals is their accomplice. One time when Dr Manjari came on admission in the hospital, the CEO was making night rounds to make sure he was okay. At some point he interdicted a night nurse for taking a nap in the ward. When the then inspection and acceptance committee raised issues on the poor quality and near expiry deliveries from KEMSA, the CEO with Mr Miringo disbanded the committee and formed a new one that has been accepting all manner and quality of surgical products into the hospital. Businesses are given to only those companies associated with them and those that agree to give out money.
It has been established that some of the companies in the KEMSA scandal are also suppliers at KNH. Set life Medical Supplies that has been supplying almost all the key items in the hospital in this tenure is associated with them. This company has been supplying both KEMSA and KNH for the last 3 years thanks to both CEOs who have been beneficiaries of the businesses. The tender for examination gloves was awarded to Harleys Limited, who refused to give kickbacks. At the height of impunity, the contract was withheld and instead Setlife company was given contracts to supply pre-sterile gloves. Directive was given that Harleys should not be given orders and instead setlife would supply the pre sterile gloves (which are 10 times more expensive than the examination gloves awarded to Harleys). Pre-sterile gloves are only supposed to be used for surgical procedures. Setlife is a popular company in KEMSA. In KNH, the company supplies everything with a good budget. Procurement officers are always afraid because it’s termed as the CEO’s company. The owner and the CEO have severally been spotted at the social joints drinking expensive alcohols and photos are available. Other items have been awarded to the company. The budget for diapers for babies was increased by 100% and a contract was given to the company. They have exceeded the budget allocated for the item and the supplier is always in KNH delivering cash to his partners. Direct procurements have been done to the company that has continued to supply with exaggerated prices uncontrollably. No adherence to procurement plan and budget set aside for the products.
Chapter 6 of the constitution- Leadership and Integrity

A State officer shall behave, whether in public and official life, in private life, or in association with other persons, in a manner that avoids–

The officers in question have failed to honour chapter 6 of the constitution and therefore it is in order that the necessary actions should be taken against them before the hospital is totally crushed, wrecked and put in shambles.

Related Content:  Tendering Of Sh859M World Bank Water Project In Taita-Taveta Questioned
Kenya Insights allows guest blogging, if you want to be published on Kenya’s most authoritative and accurate blog, have an expose, news TIPS, story angles, human interest stories, drop us an email on [email protected] or via Telegram
Related Topics:Dr Evanson KamuriKenyatta National Hospital(KNH)KNH CEO
Up Next