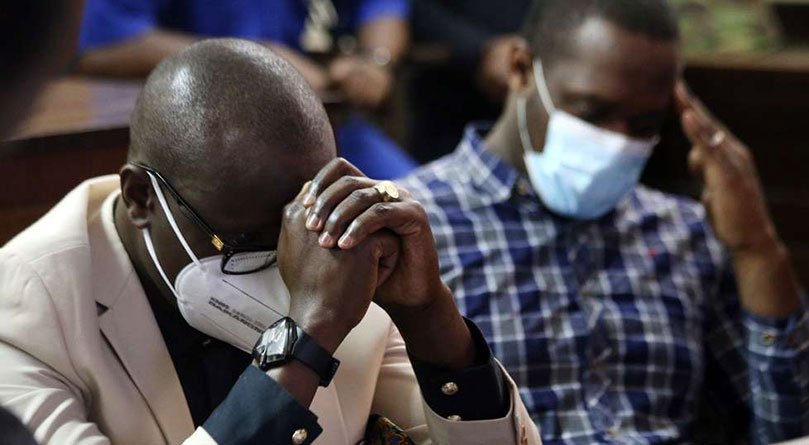 Chris Obure the co accused in the murder of Kevin Omwenga has been holding onto everything to avoid the murder charge and it seems the gods have conspired to block all his ways.

A CCTV footage of Obure’s office showing Robert Bodo entering your pick up the gun and returning it was leaked to the media probably by people with access to Obure’s office.

The leaked video has been the basis of argument by the defence saying Obure is innocent and Bodo stoke the gun from his office.

While Obure appears to have engaged mainstream and social media in arguing his case to the public and putting the blame on DCI and DPP for linking him to the murder and ignoring to include the video in their report, the DPP has dismissed the footage as having been doctored to fit Obure’s narrative.

Investigators believe that Obure who’s Bodo’s boss had a hand in the murder of Omwenga and have been piecing up evidences to nail him despite his spirited efforts to evade taking plea which will automatically tie him as murder suspect.

State Counsel Wanjiku Gichuhi has asked the court to allow the two accused persons to take plea as they followed the law in charging them with murder.

“The DPP made the decision to charge them with murder after reviewing the contents of the file and the sufficiency of the evidence on record, ” she said.

DPP say they’ve proved that Obure was placed at the scene of crime. He was seen around Omwenga’s house on the night of the shooting.

Omwenga and Chris had business relations and Bodo’s engagements with Omwenga were solely on orders from his boss it is theorized.

Back to the video, it was tactfully packaged to exonerate Obure in public’s eye but it left more questions than answers.

He left his gun unguarded and the gun was used in the murder. Those who’ve engaged with Obure tell Kenya Insights that he has been inseparable with Bodo who doubles as his bodyguard and personal secretary. We’re told it’s Bodo who gets guests and always at Chris’s office door. We’re also informed that he’s always armed begging the question as to how on that day he didn’t have his gun with him and instead left it in the office.

Obure is rarely seen in public without his bodyguard leaving many questions as to why on that day they were not together. Why did Bodo pick the gun in the wee hours of the day if it was to be used late in the night, what happened in between the day? Where was he heading with the gun, where did he go immediately after leaving the gun with the office and where and with whom he was with during the entire day.

Picking up the gun this early had all writings of a premeditated murder. Again the question would be who stood to benefit more from Omwenga’s death between Bodo and Obure the accused?

Detectives say Obure has given contradicting accounts about his whereabouts on the day of the murder.

Further reports also indicate that police had recovered two more unlicensed guns from Obure’s office going to complicate his case. The investigations have also extended to his past criminal records. Obure who’s known for bragging to have his ways out given his deep pockets, is reported to have numerous assault cases and at one point pulled out a gun at a traffic police who flagged him in a roadblock.

Police believe they’ve nailed him this time to buy his freedom.

Chris Phillip Obure had sought to be a State witness rather than an accused person in the murder of car dealer Kelvin Omwenga.

In an application filed at the High Court in Milimani Nairobi, Mr Obure wants to testify against his co-suspect in the murder Robert Bodo Ouko, who is also his security guard.

Through lawyer Danstan Omari, the flashy businessman has challenged the decision of the Director of Public Prosecutions (DPP) to prefer murder charge against him, saying the intended criminal trial is malicious and an abuse of the court process.

“The criminal justice system is being used to achieve collateral aims over a matter that is purely commercial in nature and as such criminal proceedings against the applicant would be an abuse of the court process, affront on justice and a violation of his fundamental constitutional rights on fair administration,” said lawyer Omari.

He claimed the businessman’s right against discrimination was infringed by the State when listing him as an accused person, hence the court should issue a declaration that the intended criminal proceedings are null and void.

With DPP saying they have sufficient evidence to nail Obure, it is only a matter of time before we get to know the nitty gritty details of the business relationship the accused had with the deceased.

At the end of the day, it’s not all about who killed but who would’ve wanted Obure dead and why? That’s why Obure is still stuck, he’ll have to convince the court that he never had any business relations with deceased or any fight, also the events before and on the day of the shooting was he in touch at any time with Bodo? Bodyguard’s confession could also be a breakthrough in the case.

For now Obure need to focus more on putting up great defence in court instead of engaging in media darling campaigns attempting to sway perceptions and distract investigators.