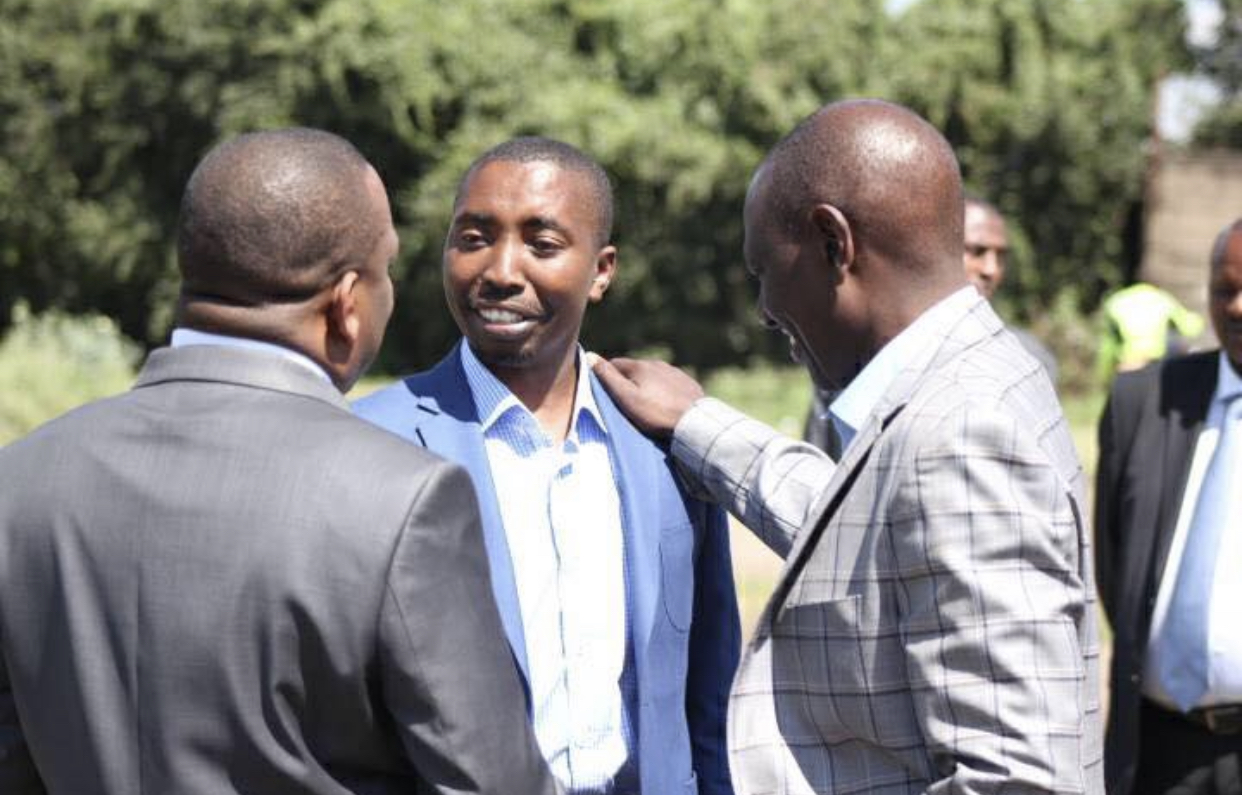 Francis Mureithi(middle) with Sonko and Ruto.

A politician in Nairobi is caught up in a suspected fake military tender scheme in which a former senior United Nations official is believed to have lost at least Sh300 million.

Detectives are investigating Mr Francis Mureithi, who unsuccessfully contested the Embakasi East parliamentary seat on a Jubilee Party ticket in 2017.

They are also investigating three other people for their role in the fraud in which Mr Haile Menkerios, a retired Special Representative of the Secretary General and Head of UN office of the African Union in Addis Ababa, was made to believe that he had won lucrative Ministry of Defence tenders.

Documents presented to police and found to be fake, cover five tenders for the supply of millions of jute bags to the Ministry of Defence, construction of a weighbridge at the Export Processing Zone in Athi River and supply of jute bags to cash-strapped Mumias Sugar Company in Kakamega County.

The fraud, said to have taken place between April 2015 and 2017, was masked in a layer of companies through which hundreds of millions of shillings was thought to have been shifted across several bank accounts, a source familiar with the investigation told the Sunday Nation.

Several government institutions that were asked to verify the authenticity of the documents used by the suspected fraudsters have confirmed that they are fake.

Mr Mureithi has failed to respond to summons by the investigating officers two times.

In his statement to Directorate of Criminal Investigations (DCI) detectives, Mr Menkerios – who is an Ethiopian – said an Eritrean woman with Kenyan residency, Abeba Weldehaimanot, told him in April 2015 that she knew a reputable young Kenyan businessman with contracts to supply jute bags to the military but needed financiers.

Ms Weldehaimanot then reportedly introduced him to Mr Hussein Osman – another Eritrean – who said the tenders were genuine and that the retired diplomat would make astronomical profits.

The two, together with a Mr Francis Mwaura, are believed to have involved Mr Mureithi at that stage, with the politician supposedly providing the necessary tender details to Mr Menkerios .

A contract between Mr Menkerios and Doc Find Company Ltd was then reportedly drafted in which it was agreed that the former UN official release $235,000 (Sh23.5 million) to Ms Weldehaimanot.

Investigators say the money was then transferred to Doc Find Company Ltd.

For this transaction, the retired diplomat was promised a $23,500 profit immediately the goods were delivered.

But Mr Menkerios said in the statement he gave police that as he waited for the profit on his investment, he was informed that another lucrative tender to supply more jute bags had been floated by the government.

Mr Menkerios was told he needed to finance that tender as well.

Together with the profits from the previous deal, the amount would be used to service the new tender. He was asked to top-up with $360,000.

The three were are listed as directors of the company and purported to open a dollar account into which the latest payments were to be deposited.

Investigations have revealed that the company was already operating a Kenya shilling account.

A month later and before he was paid his initial investment, Mr Menkerios said he was informed of yet another mouth-watering tender won by Doc Find Company Ltd to build a weighbridge at EPZ Athi River into which Ms Weldehaimanot, Mr Osman, Mr Mwaura, Mr Mureithi and the diplomat were to contribute equally.

He was informed that they had to buy out a company known as New Research Ltd, which had purportedly won the tender but did not have the funds to carry out the work.

EPZ Athi River, in response to a DCI inquiry about the weighbridge, denied there being such contract between it and Doc Find Company Ltd.

Investigations by detectives have since established that New Research Ltd was linked to Mr Mwaura, one of the people the diplomat was “investing” with in the mega project.

While still waiting for the returns on his multiple investments, Mr Menkerios was yet again informed that Doc Find Company Ltd had won another tender to supply 30,000 jute bags per month to Mumias Sugar Company.

He was asked to put in $1 million for another huge profit. The retired envoy told police that he deposited the amount into Wina Trading Company’s dollar account.

When he was again asked to invest in a Jubilee Party flag printing project after Mr Mureithi won the Embakasi East parliamentary primaries, the diplomat declined and instead demanded his money.

Mr Menkerios told detectives that through a series of emails, he was informed by Mr Mureithi that the payments for previous tenders had been delayed and would only be settled after the government released billions of shillings to the troubled Mumias Sugar Company.

The communication included several newspaper cuttings showing the plan by top government officials for a Sh3.2 billion bailout of the sugar miller.

He was also informed that the Department of Defence had instructed banks to release money to suppliers.

A Mumias Sugar Company official told detectives that there was no evidence of a contract for the supply of the bags with Doc Find Company Ltd.

The only previous transaction between the two entities was for the preparation of nucleus farm for planting. Months later, no money had been paid back to the retired diplomat.

Mr Menkerios, who returned to the country recently to pursue his complaint, decided to report the matter to DCI Parklands offices who then initiated investigations.

Police say a lawyer who reportedly witnessed the signing of the contract between the Ministry of Defence and Doc Find Company Ltd has denied any involvement in the tender.

Ms Weldehaimanot for her part, told police that she was introduced to the politician by Mr Osman and Mr Mwaura and once invested Sh25 million with them.

Detectives, however, doubt that as they have not traced such a transaction.

Investigations have established that it is Mr Osman who made such a deposit into Mr Mureithi’s bank account.

It has further been revealed that Wina Trading Company Ltd into whose account most of the Sh300 million was deposited remained dormant after the money was moved.

Detectives have written to two banks, one from which the money was transferred and the other for receiving it, to inquire whether they conducted the know- your-customer procedures as is required.

Parklands DCI chief David Chebii told the Sunday Nation that he has received the report but added that he could not give details as the matter is still being investigated.

“I am aware of the complaint that was filed at our office and we are doing all we can to unravel the truth,” Mr Chebii said.-Sunday Nation.