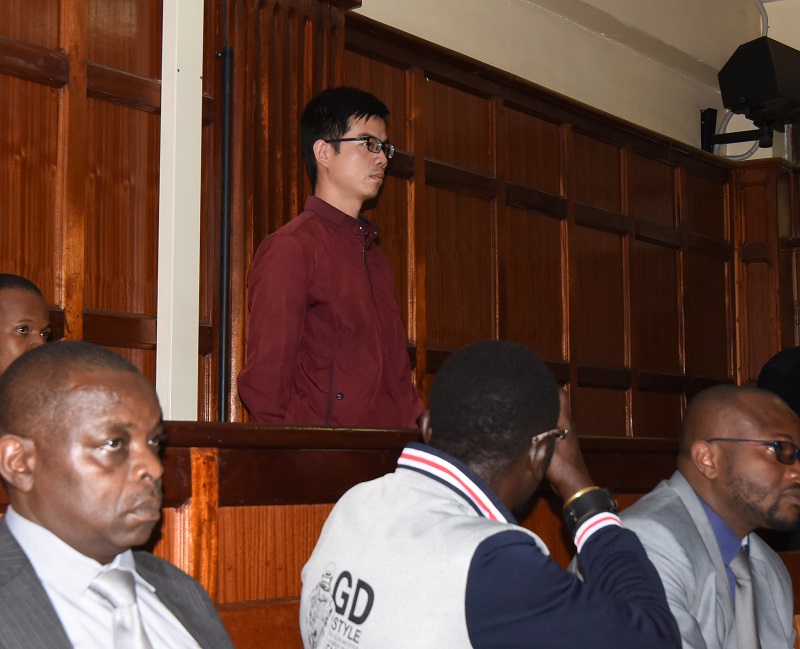 Kenya struggles to stay afloat with heavy foreign and domestic debts and the weight rests on the taxpayers who by design have to bare the wrath. We’re spending more than we’re earning interms of revenue collection which by reports has not been meeting targets. KRA has been failing to meets its obligations and they largely attribute it to non paying population.

Kenya and China have created a commercialized bond in the past decade and we’re witnessing an increased number of Chinese investors streaming into the country given cordial relationships to set up their companies here.

There’s an influx of Chinese nationals in Kenya but that’s a story for another day, the immigration department is currently doing a swoop on illegal immigrants many of which are Chinese and have been deported, just a few though meaning the problem still is intact.

Apart from mistreatment of locals, a good number of Chinese firms have been accused of several malpractices and fraudulent rings including tax evasion and that’s why we’re talking about Housemart Company Limited a subsidiary of Sunda International Ltd a leading exporter in building materials.

The Chinese company’s offices which are located on Mombasa road and are involved in the importation of various items including construction materials and household commodities, are also at the centre of a multi billion tax evasion scandal.

High Court’s Lady Justice Hedwig Ong’udi recently issued orders freezing the accounts of Housemart Company Ltd following an application by the Kenya Revenue Authority claiming that the Chinese firm has evaded tax through under declaration of Value Added Tax of its products since 2010 totaling to Sh2B.

The order was issued for preserving funds and prohibiting the release, transfer, payment or other dealings involving the money held by the company at Barclays Bank of Kenya, Standard Chartered Bank, NIC Bank and Bank of Africa pending determination of the suit.

KRA says the Chinese company is engaged in tax evasion and money laundering through the creation of “briefcase companies” who have no physical presence in Kenya and used to syphon millions of shillings from the country.

According to preliminary findings of investigations done by KRA and presented before the court, it revealed that the company has evaded taxes amounting to sh2,243,781,488 between 2015 to 2017.

Playing their cards smart, Majority shareholders and beneficial owners of Housemart are foreigners and corporations with foreign addresses which are suspected to be tax havens, therefore, making it difficult to repatriate the funds once they exit Kenyan borders, a line of argument raised by KRA’s lawyer Sylvester Okello.

According to an affidavit filed by KRA forensic investigator Cyrell Wagunda, they received information in January that six companies were registered and used to open bank accounts in which proceeds from sales by Housemart Ltd were being channelled.

He swore that he discovered tax fraud and money laundering through diversion of sales and using fictitious forms to claim VAT refunds.

“We discovered they were using their employees or security groups contracted to transport cash totalling sh4 billion. Once the funds are transferred to the six companies’ accounts, they then wire it to another company based in China without declaring their tax,” swore Wagunda.

Separately, Housemart’s MD Mr Ye Wei was also caught in the same problem, the Chinese national was charged in a Nairobi court with three counts of tax evasion. Mr Ye was arraigned at the Milimani Law Courts where he was jointly charged with others not before court evading on payment of tax amounting to over Ksh 800 million and an additional count of failing to declare sales amounting to more than Ksh 3 billion.

He denied the charges and was released on a Ksh 2 million bond with a surety of a similar amount or a cash bail of Ksh 1 million. The case will be heard on November 21, 2018.

Between 1st January 2016 and 30th June 2017, he is alleged to have willfully defaulted in paying Ksh 154,328,071 being income tax payable to the Commissioner of Domestic Taxes in contravention of the Tax Procedures Act.

In the fourth count, Mr Ye is alleged to have deliberately defaulted on an obligation to declare sales amounting to Ksh 3, 232, 584.773 for the period covering 20th January 2016 and 20th December 2017 to the Commissioner of Domestic Taxes as required by the Value Added Tax.

A look into this raises a serious concern over the levels of money laundering going on in the country more specifically with Chinese firms which I gather are very rampant. Outright, all these can’t hapoen without complicity and conspiracy with local authorities. It’s in this backdrop that as investigations advances, those KRA officials who’ve helped the company engage in this scam must also be investigated.

Kenya can’t afford to humbly stay in a relationship with China when its not symbiotic. I doubt if there could be leniency if a Kenyan engaged in such scams in Beijing. Companies like Housemart and directors like Ye Wei ought to have their operation licenses withdrawn and conspirators like the fraud manager Ye and alike be thrown in jail.

Goodnews is the accounts are frozen even though Housemart has sued KRA for their action. While denying any link to the alleged malpractice, the firm noted that the caveat placed on its bank account has crippled its business operations and pleaded with the court to lift the freeze order.

Lemme say in my opinion, they deserve to suffer and even be thrown out of the country and operations if they can’t pay taxes and laundering money to tax havens. Doing business with such a company is also another risk one need to consider before inking any deal because you can imagine how many businesses have been now stalled with the accounts frozen. They should remain frozen until taxpayers recover their stolen money.

Money laundering and tax evasion is now becoming a real issue and Kenya Insights is dedicating efforts to highlight and expose scamming companies like Housemart, we’re therefore appealing for any useful information and tips on this topic so we can expose these frauds. Send me an email ([email protected])