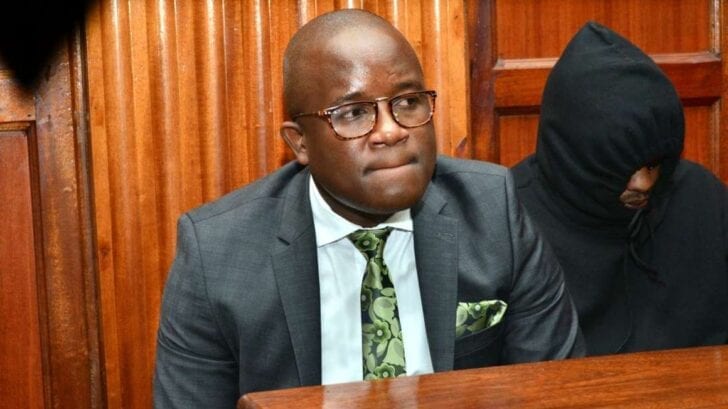 The investigating officer in a gold fraud case has told court how he arrested suspects accused of defrauding a Brazilian national Sh 23 million.

DCI officer Gerald Kamwaro told Chief Magistrate Wendy Kagendo that the complainant, Samir Entoro reported that he had been defrauded after the people he intended to do gold trade with failed to ship the gold to Dubai.

Kamwaro said that the complainant had deposited USD 42,000 at NIC bank in the account of Tom Okundi.

“The complainant had been given the account number by the 5th accused person (Jared Otieno),” the investigator testified.

The officer produced an acknowledgement form from Okundi Advocates whereby he had been authorised to disburse the money to one Julius Kibet of a non-existent ID number. This was in May 2018.

Kamwaro told the court that he received several documents from the complainant including a copy of bank transfer from him from Bank of America to Okundi advocates at NIC bank.

There is also a tracking number which was to track the gold from JKIA to Dubai.

The accused persons, businessman Jared Kiasa Otieno, Philip Nahashon Aroko, lawyer Munzala Javier Rumili and Sikanda Ismael Abdalla are accused of defrauding Brazilian national Samir Entoro the Sh 23 million by falsely pretending that they would ship to him eight kilograms of gold from Nairobi to Dubai.

The accused persons are alleged to have committed the offence between May and June 2018.

Kamwaro told the court that he arrested Aroko on 9th June 2018. He was traced through the mobile phone number he had given the complainant and the car he was using.

The investigator also told the court that USD 30,000 which the complainant had also paid was refunded back to him.

It is alleged that the complainant paid over USD 200,000 for the gold even though it is not the amount indicated on the charge sheet. This is because some of the money had been paid in cash.

The complainant and Akinyi had allegedly known each other for over 10 years.

Lawyer Munzala who opted to cross-examine the witness even though he had a lawyer representing him told the court that he was working with the complainant to recover his money and not a thief.

Munzala fired up demanding to know why he was arrested yet he was assisting the complainant to recover his money.

The officer responded that they believed he was part of the squad that defrauded the complainant.

Advocate Tom Okundi who is the only witness remaining. An application by the prosecution to adjourn the matter was denied since Okundi has been summoned three times but failed to appear to testify. This therefore, closed the prosecution’s case.

The defence will file their submissions before the court makes a ruling on whether the accused persons have a case to answer,