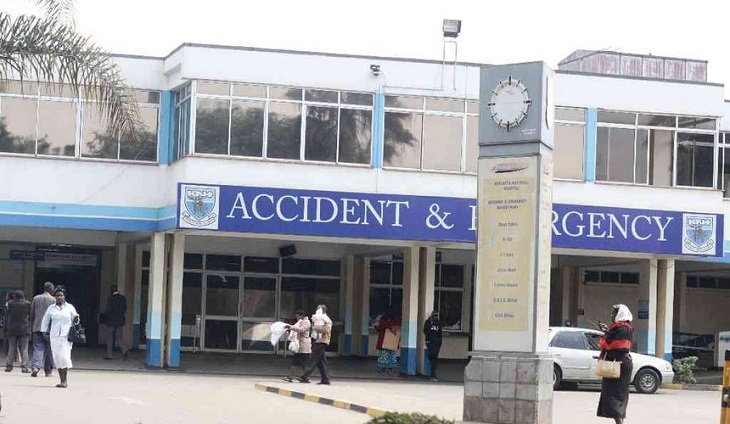 Kenyatta National Hospital(KNH) is going through an oxygen crisis in the height of the deadly Delta variant. Being the main referral hospital in the country, it receives the highest number of patients which consequently puts a bigger workload on the workforce.

According to a distress letter sent to Kenya Insights, the staff are bearing the brunt of the lack of sufficient oxygen supply whose tender was awarded to a shoddy firm TUNASCO LIMITED under unclear circumstances even though Devki Group had offered to supply the hospital with oxygen for free.

According to the helpless staff members, TUNASCO was awarded the liquid oxygen supply tender last year but they’ve never lived to the catchy targets they proposed. Apparently, at one point the hospital was forced to shut down their theaters due to the shortage of the critical oxygen supply coming from the under delivery of the same from TUNASCO which has come under harsh criticism.

Tunasco Insaat Anonim Sirketi (Tunasco), is not new to controversies and at one point was blacklisted by KEMSA as a supplier despite putting up a spirited fight for the award for supply, installation and commissioning of racking system and associated works, Kemsa struck it out as lacking merits.

Tunasco, a company owned by shadowy characters Abdulwalli Shariff Ahmed is said to have received Sh175 million from NYS for supplying air.

He said Tunasco, in which he was a shareholder, provided the funds for the buying of land registered in the name of Zynmat Holdings, a property held in trust by Mr Shariff. In agreeing to transfer his shares in Tunasco, Mr Tunc was to be paid US$544,900

A year later, ABDULWALLI SHARIFF AHMED who had by this time acquired ownership of TUNASCO INSAAT became the recipient of Kshs 175 Million from NYS Season 1 for supplying,…yes you guessed right? AIR! #STOPTheseTHIEVES @ODPP_KE

Noordin must go after all the BIG FISH and not just hunt down the small fish like animals. Most of these fish are holding positions of PRIVILEGE and enjoy th trappings of power to get away with their crimes! #STOPTheseTHIEVES @ODPP_KE pic.twitter.com/MwjHfFTIlx

The power that the owners of the firm enjoy brought about by association and money, makes them act with ‘untouchable’ attitude.

For example, despite his questionable character Mr Abdulwalli Shariff Ahmed was appointed Honorary Consul for Romania, where he enjoys diplomatic immunity.

The rogue firm is registered both in Kenya and in the United Kingdom.

The bridge which was supposed to connect people from either sides of the Tana River was overcome by floods while still under construction in May 2017.

Despite a bad reputation the company still wins GoK tenders.

As earlier stated, the tender winnings are done through dark art of coercion.

It is not that the company is qualified.

He does this with his links to rogues politicians and high connections, the firm apparently gives a good kickback, something loved by the crooked In leadership.

It has become a norm in parastatals for tenders to being awarded to firms with the deepest pockets and those offering the biggest bribes as management fold their eyelids on the deliverance capacity. But here is Kenya in a pandemic, and you gamble with lives? Just how low can it get?

Below is the letter as it was sent to us from KNH grieving staff.

“What is happening in Kenyatta National Hospital (KNH) is the Newschool version of IMPUNITY. Oxygen has been an issue in KNH for the last two years. Last year but one, The management awarded a tender for supply and delivery of Medical Gases – Liquid oxygen to a company called TUNASCO LIMITED. The company never reliably supplied the item for the whole of the year. This brought a lot of issues in the hospital since the critical item was never available in the hospital.

At some point, all theatres were closed for some time just because oxygen was not available. The management was not moved by this because the top guys can access any medical facility of their choice. Infact none of them has ever been treated in KNH so whatever happens to the normal mwananchi hospitalised there is none of their business. The company had coughed some good money. Their contract was never cancelled upto the end of the period in spite of the non performance.

This year, the tender was awarded to Noble Gases Intl Ltd. The company has adopted the same tradition and most of the time the product is out of stock. The company does not have ready stocks and relies on imports despite the fact that BOC Kenya Ltd, based in the industrial area, reliably manufactures the same product and comfortably supplies to all the hospitals in Kenya. What happened to Devki who volunteered to supply oxygen for free jameni? What happened to BUY KENYA BUILD KENYA? In the last three weeks, KNH has lost close to 10 staff who were being treated there and could not get oxygen in time.  This has brought a lot of tension in the hospital.

Deaths have also increased. If you try to raise any issue, you are demoted, interdicted and threatened. In fact currently, sycophantic juniors are being elevated to supervise and intimidate the firm professionals who try to query any issues and follow  laws.
Early this year when the matter reached parliament, the management were called by parliament to explain the gross issues. Instead they interdicted some staff in stores and engineering as cover up. They were embarrassed and forced to call back the interdicted members of staff apologising that there was no evidence. HR and procurement rules and laws are  followed at the management’s wish and it’s now becoming a market place. Almost equivalent to the KEMSA “walk outside and get a tender”. The management is well connected to DEEP STATE and they can “control” everything. EACC,  PPOA, ministry bosses  name them.
Fake documents are being used to commission equipment and lifts. Even now lifts remain a challenge. We are going back to lifts being shared with dead bodies. Suppliers are harrassed to give out money failure to which the contracts are given to others. If you are in the management and differ with the system you are transfered to the ministry or Othaya as punishment. Staff union was pocketed. We are dying. God help us!”

BOC Kenya filed a complaint with the board alleging that KNH improperly awarded Noble Gases some of its usual supplies, despite the fact that Noble Gases’ bid was successful for all items tendered.

BOC Kenya and Noble Gases’ offers were judged to be the lowest appraised for the supplies after three levels of evaluation by KNH.

Noble Gases was given a tender to furnish ten products for the tender, while BOC Kenya was awarded two.

The board, chaired by Faith Waigwa, stated that the second bidder, Noble Gases, had not filed any papers in response to BOC Kenya’s request for review.

The petitioner and Noble Gases received a letter of notification of intent to award the tender, which was later thrown aside by the PPARB.

“The procuring entity’s letters of notification to award the tender for the supply and delivery of medical gases dated June 11, 2021 issued to all unsuccessful tenderers be and are hereby cancelled and set aside,” the board resolved.

It directed KNH to issue fresh letters of notification to the contract in line with the recommendation of the evaluation committee that dealt with the tender.

The board said the notifications be sent simultaneously while notifying the unsuccessful tenderers of the outcome of the evaluation of their tenders.

“Noting that the subject tender is for medical gases that are quite a needed commodity during these Covid-19 times, the board deems it fit to uphold the recommendation of the evaluation committee,” the ruling reads.“However to align the entire process with the law, it is important that KNH issues fresh letters of intention to enter into a contract as recommended by the evaluation committee.”

Related Content:  Revealed: The Evil Plot By Health PS Psychopath Muraguri Working With Office Of The President To Have KMPDU Officials Jailed For Six Months

BOC had contended that KNH breached the procurement law by failing to notify the successful tenderers of the outcome at the same time as the unsuccessful ones.

It cited failure by the hospital to indicate the reasons for which its tender was non-responsive in respect of the items whose tender was handed to Noble Gases International.

BOC Kenya currently supplies KNH with medical gases on a request for quotation basis but was notified it was only to supply two items, which birthed its protest.

Kenya Insights allows guest blogging, if you want to be published on Kenya’s most authoritative and accurate blog, have an expose, news TIPS, story angles, human interest stories, drop us an email on [email protected] or via Telegram
Related Topics:Abdulwalli Shariff AhmedKemsaKNHKNH staffTunasco Kenya
Up Next