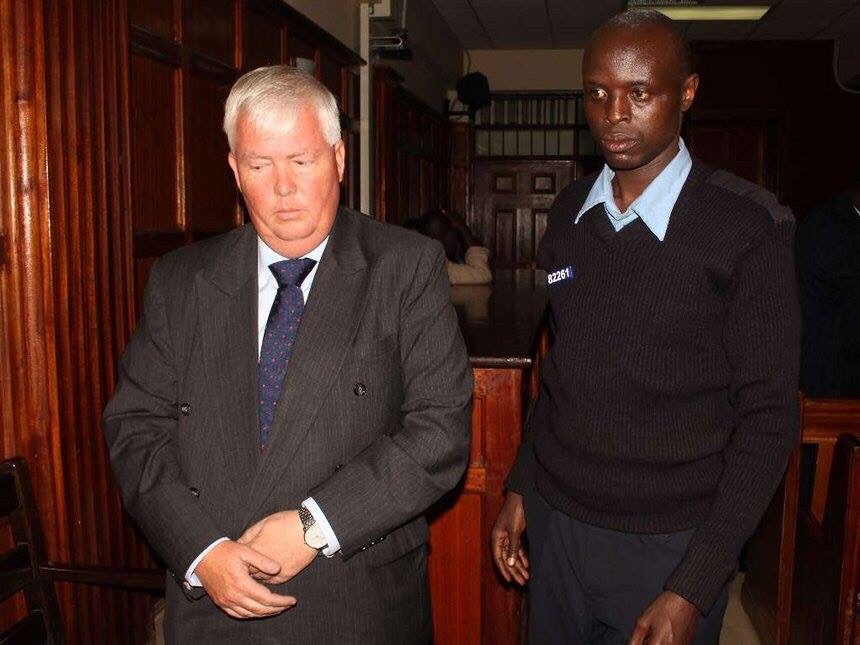 Controversial City lawyer Guy Spencer Elms is the proverbial cat of nine lives when it comes to court cases. After getting out scot-free on the Anglo Leasing scandal even after being named in the Panama Papers, he has survived another case where a judgment has been ruled in his favour, despite strong case against him, following the intervention of by the office of the DPP.

City Magistrate Joseline Onyango, ruled in the case in which Agnes Kagure had filed a criminal case against the lawyer for forging a will to lay claim on prime property in Karen, said there were inconsistencies in evidence even after the National Land Commission CEO Chavangio Aziz Tom withdrew a report that Guy Spencer’s defense used to fight the criminal charges.

The parcels of land in question belonged to the late Roger Bryan Robson who died in August 2012. City businesswoman Agnes Kagure said she had bought the land while Guy Elms argued the late lad appointed him the executor of his will to sell the property and donate the proceeds to environmental conservation activities.

While the ruling was unusual Guy Spencer could still be freshly charged as he was released under section 87A of the Criminal Procedure Code – and Agnes Kagure is likely to appeal. Lawyer Messiah Micheal Osundwa holding brief for Wandugi Kirathe requested the City Magistrate for a certified copy of the proceedings and ruling. He is planning to challenge the ruling and get fresh charges against Guy Spencer.

This had also gone against a judgement by Justice Odunga who had ordered Guy to defend his case after he attempted to stop the prosecution in court. His case was dismissed at his cost.

Guy Spencer Elms, who is linked to several criminal cases including the dam scandal where the tax payers may have lost a Ksh21 billion, has been fighting to be confirmed the executor of the Will of the late British millionaire Roger Byran Robson.

Since 2017 when the cases started, Spencer has found himself on a wild goose chase as he struggles to find authentic documents to prove his case. Armed with the Will, which would be flagged as a forgery, Guy Spencer Elms rushed to the High Court after Robson’s death seeking administrative powers as the sole executor.

This were his first steps in the journey to consolidate and transfer to his name assets left behind by Roger Bryan. Earlier using the ‘Will’, he liquidated the deceased’s shares and stocks running into several hundred million shillings.

But soon it emerged that the Will was, after all, not authentic. He has been fighting off forgery charges in court, where he has been unable to prove the sanctity of the will. Reviewing various documents relating to the will, a keen person can easily spot the glaring differences in the Robson’s signatures, with one being fake.

Also, the Will was never registered as required under Kenyan law, while court testimonies by associates of Spencer confirm that Guy was the author of the Will that apparently granted him executorial powers.

A witness of Spencer shocked the Nairobi High Court in August last year when she testified against his argument, confirming that Spencer was the author of the disputed document.

Ms Ann Mwalulu, a partner at Archer & Wilcock Advocates, revealed in the High Court that Spencer was indeed the author of the Will, which was backdated to 24th March 1997. She said by the time the will was drawn she was no longer working at the law firm. “I vividly recalled that in early 2005, Guy sent a driver to pick the disputed will from our law firm,” said Ms Mwalulu said.

She said Archer & Wilcock Advocates were never given instructions by the late Roger Brian to release the file and was not aware the estate was to be distributed. In fact in his application for orders of prohibition against forgery charges at the Milimani Law Courts in November 2016, Spencer confirmed the Will was authored by Archer & Wilcock Advocates and not Roger Brian.

A forensic document examiner, voice and acoustic analyst who inspected Guy Spencer’s documents declared them forgeries. Mr Antipas Nyanjwa, who was assigned by the CEO of the National Land Commission said thus in his report: “The alleged forgeries by Mr. Guy Spencer have been examined by the police handwriting expert who in his opinion found them to be forgeries.”

He said he found ‘no agreement’ between the signatures as they differ fundamentally in all characteristics from Roger Robson’s style of writing. His name had even wrong spelling on his letter of resignation which, the expert noted, was unusual.

“The author of he forged signatures has a higher pen speed that Mr Roger could not attain at the time the documents were signed due to his age save for his health,” he said.

He added that he had analysed Robson’s signatures over a span of 34 years and their variations but they maintained the consistency with exceptions of variations that are natural in hand writing.

Besides, Spencer has been unable to produce the original titles to the land in dispute. He has tried on several occasions to have the registrar do a search of the title, admitting in the 2012 letters that he did not have an original copy of the title for a land he claims was left in his hands.

“We are yet to locate the original title that is why we have asked for a search. We have produced an official search dated 16th June 2006 and faint copy of an Indenture dated 28th December 1955 which has a copy of Plan Number 45457 for the 5.18 acre plots which comprise the property,” he wrote to the Chief Registrar of Titles in September 2012.

At one point, Spencer put forward a claim that the land was still charged to a mortgage facility and consequently sought to procure an invalid discharge (re-conveyance) of mortgage document dated 2016 as the title of the land.

However, it turned out that the only mortgage charge to the said land was discharged in 1993 upon full payment of the loan facility and the lender, Habib Bank, released the original title to Roger Bryan Robson, who passed it the current rightful owner, Thomas Mutaha, in 2010.

The re-conveyance by Spencer was not dully registered with the Ministry of Lands and was executed in violation of the original title deed as required in law. It would also have been in contravention of High Court orders for the preservation of the late Roger Bryan estate pending determination of all dispute matters pertaining to the estate.

Habib bank sealed the fate in a June 18th 2015 letter to Spencer, through M.A. Khan Advocates. “We make reference to your letter dated 15th June 2015 and inform you that we are unable to execute the conveyance until”…a pending court matter relating to the title is determined, among other reasons.

Elms courtship with controversy however, doesn’t seem to have an halt, according to an investigative report by UK’s Money Trail investigative project, the sleek lawyer has been aiding Dutch nationals in the horticulture industry to avoid paying taxes in what is feared to have cost Kenyan public and tax collector billions in unregistered dues.

Dutch growers who dominate the flower sector in Kenya were already in the news because of environmental violations and poor employment conditions. Now, as investigative journalists Romy van der Burgh and Linda van der Pol found out, they are also being accused of avoiding taxation in Kenya while proudly wearing the “fair trade” badge.

A search through registrations and annual reports show us how flower companies are evading local taxes through export companies in the Netherlands and trusts located in tax havens such as the Cayman and British Virgin Islands, Liechtenstein and Jersey. Others sell their revenue to sister companies in Dubai for an artificially low price, which means that profits do not fall at the Kenyan farm, but at a foreign entity where the profit tax is also much lower than in Kenya. These tax evasion are undertaken in the name of Oxymoron “Fair trade.”

Of the 32 flower companies in Kenya with atleast 13 Dutch origin are linked to tax havens. Almost all Dutch growers who went to Kenya transferred part of their business to a Dutch company. Companies that set up an international group of several companies can transfer and settle profits and losses within that group. This way they can ensure that the profit is as low as possible in the country with the highest tax rate. Because Kenya has a high profit tax, this model is attractive for companies that operate there. The Netherlands has tax treaties with many other countries. This makes it easier to channel money through the Netherlands to a tax haven than from Kenya.

An incisive investigation to one notorius flower farm company by the name Oserian owned by Zwager family, Deloitte audit report in Kenya Chamber of Commerce, Oserian’s revenue for 2013 is estimated at 2.7 million euros. Below the line, only 3,910 euros of profit remains on their own financial statements, of which Oserian paid just under 1,041 euros to the tax authorities.

The Zwager family, owner of Oserian, built a whole web of companies around the nursery that together cover the entire chain, from breeding to sales and distribution. The ultimate stakeholder in all these “Dutch” companies is Mavuno Group Holding Company Establishment, a trust in tax haven Liechtenstein, which is again managed by a trust office. No country in Europe charges as little tax as Liechtenstein, and above all, it is not open to public scrutiny.

“All tax ports come by. You don’t need so many havens to evade tax. Many large companies nowadays invest in their public image: they no longer settle in the Bahamas but in lesser known tax havens such as Ireland or Cyprus, because they still claim to levy about 15 per cent tax. I do not see that consciousness here. It would not surprise me if this company thinks: ‘The closer to zero, the better,” says Vincent Kiezebrink of the Research Foundation for Multinational Enterprises (SOMO).

A world full of crafty lawyers and accountants unfolds around. The fulcrum in this is the law firm Raffman Dhanji Elms & Virdee based in Nairobi along with other 2 law firms that help these cartels evade tax. Spencer Elms says he arranges the tax planning of various Dutch nurseries himself, and he also helps farmers with agricultural land transactions. When investigators presented him with the offshore constructions, he said: “People immediately think of something bad like hearing about a trust in Liechtenstein or the British Virgin Islands, but often it is just a way of’ estate planning. Trusts are not necessarily a bad thing “.

According to the OECD, Africa misses 46 billion euros in tax revenues every year from evasive multinationals. The United Nations estimates that amount to be 92 billion euros.